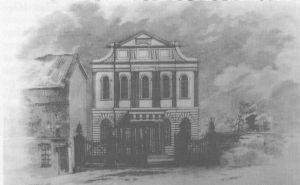 Walcot (Wesleyan) Chapel was designed by William Jenkins of London and opened on 30th May 1816, only 14 months after the foundation stone was laid. It was the second Methodist building in Bath, the first being in New King Street (now demolished) where the congregation had become too large for the building. 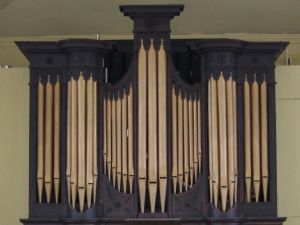 The organ was originally supplied to the newly opened Bath Assembly Rooms in 1771. It was moved to Walcot Chapel in 1818/19. This was a year or so before organs were officially sanctioned for larger Methodist chapels and when the use of organs in Methodist worship was controversial!

We claim it is the longest- serving Methodist organ. There are some older organs in Methodist churches but they were installed after ours.

The room under the church was used as a schoolroom, with separate entrances for girls and boys. In 1817 there were 414 children in the Sunday School and 82 teachers, but each week some of them were out teaching ‘in the villages’. Teaching included spelling, writing and reading. From about 1851 until 1935 the younger boys from Kingswood School attended the morning service, sitting in the gallery. They were often regarded as a nuisance as their behaviour was not what church members expected! 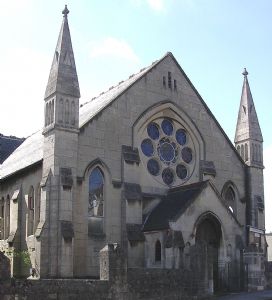 The foundation stones date the chapel from 1881.  However, 'Claremont Chapel' is shown on local maps in the early 1850s across the road, at the end of Claremont Buildings, although there is nothing on this site on the parish tithe map of 1842. In the 1880s that chapel is shown as 'disused.'

The organ was built by Sweetland of Bath complete with pipes bent to fit under the curve of the ceiling.  It was removed as part of the refurbishment in 2017 and relocated to Sir William Romney's School in Tetbury.

Sunday worship ceased at Claremont in December 2014 and the building was repurposed as Claremont Community Centre, a space for community groups, for music and art events and a community cafe. The Centre closed at the end of August 2020 in order to concentrate both human and financial resources at the Walcot building.

22 men from Walcot and Claremont are recorded as having lost their lives in World Wars I and II. We have traced the Commonwealth War Graves Commission entries (used by permission) and have been able to find something out about the lives of all but one of these.

If you think you may be related to or have any more information about any of these men, please get in touch. 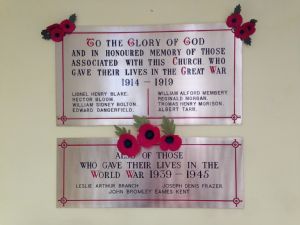 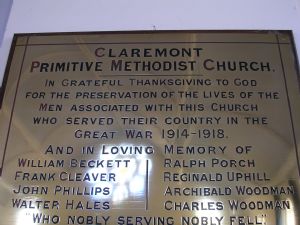